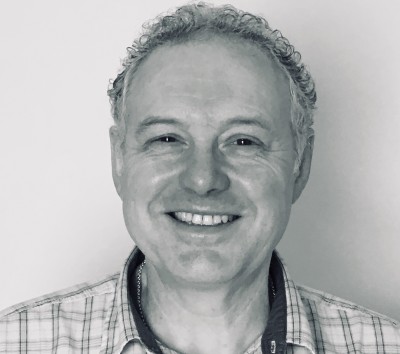 Stephen Beaver DO Dip. Paed. Ost. is the principal practitioner and founder of SW19 Osteopaths. A practicing osteopath for 30 years, he is still passionate about learning and developing his osteopathic skills and effectiveness.

Stephen was one of the first osteopaths in Britain to gain a formal qualification in paediatric osteopathy and taught in this field in the UK and internationally for more than a decade. Currently he devotes his time to everyday patient care in his clinic, helping people resolve their physical issues and pain and developing new skills in specialist areas, such as chronic fatigue syndrome and severe neuro-spinal injury.

He has always practiced in Wimbledon and is well known locally with word of mouth referrals bringing people to see him. He has treated and cared for four generations of some families.
Osteopathy was a second career for Stephen after he was treated for a back injury; prior to this he worked as a Luthier and woodcarver and he believes that craftsmanship, science and a little inspiration all combine to make the osteopathic art.

I recommend Charley thoroughly. I have had years of sudden onsets of back pain that have interfered with daily life. I have never been sure of the difference between an osteopath, a chiropractor and a physio (despite even receiving some physio in the past that didn’t resolve the issue) and I was a bit sceptical of seeing an osteopath at first. I was incredibly impressed with Charley’s thorough initial consultation, checking every avenue for my back pain. The treatments have been remarkable and I am shocked by how quickly I have responded to Charley’s treatment and her detailed exercise plan to support my core and increase my back mobility. Charley’s manner is friendly; she puts you at ease whilst being professionally direct and always very attentive. I strongly recommend Charley.

After suffering with severe pain in the left hand side of my back, I decided to seek advice from Simon. I had previously sought medical advice, but the condition had not improved. On the first consultation Simon took detailed notes and then suggested that I could be suffering from Spondylosis. He examined my back and spine and found that this was the case. He is a very caring and conscientious practitioner. I have been treated by Simon on a regular basis and he has made me feel much better and with his treatment and advice, the pain has decreased considerably. I would thoroughly recommend his service.

My personal experience at SW19 Osteopaths has been wonderful. My osteopath, Charley, is vey efficient at her work whilst maintaining a professional manner. In addition to this, she is always on time for our appointments which is very helpful when on a tight schedule. I have now completed five sessions of osteopathy with Charley which have greatly benefited the issues I experience with my back. I would highly recommend attending SW19 Osteopaths especially having Charley as your therapist as she is very welcoming and great at answering any queries and/or questions you may have and overall amazing at what she does. Many thanks

I have seen Charley for several months for my neck pain, sinus pain and knee pain. Her gentle but assertive treatments have released the tension and relieved the pain – instantly in the case of my neck. She also provided exercises and advice, which I continue to use. I would recommend her without hesitation.

I saw Yan-Kei Man following a musculoskeletal injury, which she helped me treat. Impressed with Yan-Kei's professionalism and attentiveness, I have since introduced my young kids (3 and 5 years old) to osteopathy. In hindsight, a wise decision given that a scooter accident had left my 5 year old with a slight postural dysfunction. I thoroughly recommend Yan-Kei for her specialisation and impeccable manners.

Steve always manages to put me back together again - then life is a pleasure!

I saw Simon regularly to help me with symptoms of multiple slipped discs. Cannot recommend enough - as a first time Osteo patient I found Simon to be professional, helpful and friendly. Everything was done at my own pace and fully explained so I knew what it all meant. Many thanks again!

I've been visiting the practice since February and have been seen by Yan-Kei. I'm just writing to leave a brief review of the practice and of her. The treatment I have received from Yan-Kei has benefited me greatly and I am improved in all aspects of life. I would recommend this treatment to anyone who feels any sense of discomfort and seeks to change their life for the better. Look forward to my next visit

Just before Christmas, my back ‘went’. By ‘went’ I mean I could barely walk and had constant pain in my lower back and leg. I was off work and spent most of the time lying on the floor. I was treated by Stephen and Simon, both of whom have a professional but very calm manner – ideal for anyone who’s in a lot of pain. They identified muscle and sciatic nerve damage. They obviously knew what they were doing because the pain gradually started to ease, such that by the beginning of March I was back on the treadmill in the gym. Would I use SW19Osteopaths again? Definitely. Only this time I’d go sooner.

Finding Simon has had a profound impact on my health and recovery. I have found him to be a wonderful balance of professionalism coupled with a sensitivity and intuition that had supported me when I most needed it.